AI is bad even at just using the Chmmr's tractor beam. It'll constantly hold it down even when fuel is empty, when it usually works better in smaller bursts. Also its tendency to always directly chase with heavy ships is bad.

Chmmr actually takes some skill to use well, but playing either side of the AI matchup it comes across as a pretty brainless ship.
Top

The ZapSats are also annoying when playing as Syreen. These ZapSats zap your future (or mutineering) crew. You cannot (re-)collect them...
Top

ANALYSIS: Their song was their only fleeting chance, and they knew it! And right they were, but ‘fleeting’ may have been an understatement! No sooner than the first few notes of the mesmerizing hypnotic song were beckoning the little crystal guys into escape pods then there was a large space scalpel dissecting their Penetrator ship into something… well, less penetrating. Those Syreen ships were getting ripped apart right and left! The battle was so lop-sided that even when they finally sung the Chmmr down to only their psionic-resistant captain, they still had to shoot past the ZapSats, and with only their Particle Stiletto Beam, that was a difficult proposition. In fact, only after going through a couple more Syreen ships that one ship finally managed to charge past the ZapSats (mostly due to a nearby planet) and needle their way through the rotating barrier, firing their weapon at point-blank range! However, I noticed as I closely monitored the entire battle, the ZapSats never fired on the deserting crew, the opportunity for recollection was definitely there, but since the escape pods’ thrusters are so slow, the ZapSats would often times collide with the hypnotized crystal abandonees before they could make it back to the mother ship, but they never zapped them to death the same way a cruiser will if you activate the PDL with its own escape pods nearby. Were you just testing me again, krulle? Hmm… perhaps whenever encountering a Syreen vessel, the captain should order all escape pods to be sealed in their compartments, or better yet, jettisoned into space so the crew can’t escape!
-------------------------------------------------------------------------------------------------------------------
“He tasks me. He tasks me, and I shall have him! I’ll chase him ’round the moons of Nibia and ’round the Antares maelstrom and ’round Perdition’s flames before I give him up!” ― Khan Noonien Singh
Top

Pretty sure that this is just the crew throwing on suits and jumping out the nearest airlock. At the very least, Dreadnoughts don't have any of the aforementioned safety features, but the crew abandons ship just the same.
Top 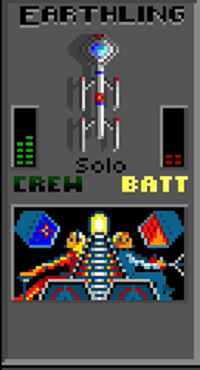 No, I was not testing you.
I definitely remember the crew being shot down by the ZapSats.
Maybe that was a bug like the missing Slylandro Probes in the star systems, which got corrected in the transfer to UQM code basis?

Or my memory is testing/failing me again.
Top

The crew would last a lot longer if they bothered to throw suits on.
Top

And had a chance of actually reaching the Syreen/Sirens if they would use a jetpack to build a bit more speed.
Or a kind of tractor beam for the Syreen to pull in the hapless new crew, without actually having to fly across them.

The Syreen are seriously underpowered this way (IMHO). And their stiletto heel is really week. (At school we loved imagining a line of Syreens standing at the bow and breaking of the heels of their new stilettos and feeding the heels to the gun. Or the reverse: stealing the munition to attach to their navy-issued flat shoes to make stilettos. Who came up with the name for that gun???)
An auto-fire for that button would've been nice (or using the main fire button to the autofire toggle off/on).
In SC1/2 I often jammed my keyboard because I kept the fire button pressed when playing the Syreen Penetrator (dynamo is faster than energy depletion from firing).
Top
Post Reply
74 posts