The Troglodyte wrote:the already thrusting y-form to travel even faster and actually overtook and passed the missiles it had just fired!

Using the gravity whip, this is easy to achieve, even without using the tractor beam of an Avatar.

Especially dangerous trick when flying the Podship or the Cruiser.
Both ships can harm themselves using their primary weapon (as can the Eluder B.U.T.T., but that tracking torpedo is utilized backwards, so in most cases this isn't that harmful).

Okay, with the Cruiser I had the case of me flying into the just spawned missile only once.
But Podship captains know how dangerous it is to fly fast and not turning the ship before firing.
Top

ANALYSIS: This one was a peculiar battle and rather difficult to describe from front to back since it took on many different shapes, but most of the dynamics and execution centered around the tractor beam usage on the Orz, but at full thrust they could stay out of reach and target their Howitzer Cannon and inflict damage on the Avatar’s hull, sometimes taking out a ZapSat in the process: 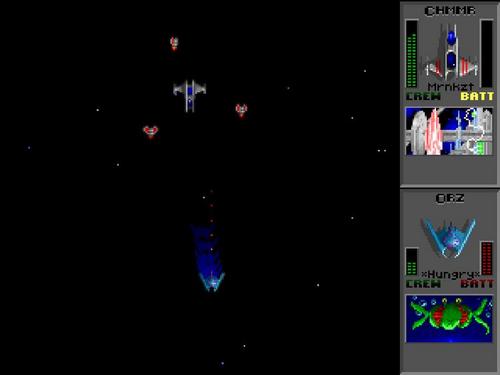 ANALYSIS: Let’s see if the ZFP folks can figure out a little math problem and determine how many Stingers it would take to destroy one Avatar…

Zoq ― “The Stingers seem to be getting blasted apart at a geometric rate. A whole fleet of our Stingers could barely take down the Avatar’s crew from 42 down to about 30, give or take 1 Chmmr.”
Fot ― “…”
Pik ― “AIEE! That means if it takes 14 Stingers to take down around 28% of the Chmmr’s crew… then that would mean… ah… wait a minute… let me calculate… uh… That means, it would take… A WHOLE MESS OF THOSE THINGS!”
Fot ― “…”

Orz's AI is atrocious. I'm surprised it did that well.
Top

ANALYSIS: Using DOGIs is this match-up was utterly stupid by the “Chenborg”; it must be some kind of hard-coding that basically requires the computer to unleash a DOGI whenever it’s at full strength, much in the same way a Mycon will automatically regenerate its crew under the similar conditions -- even if it’s just one crew member, or even if there’s an Arilou or Yehat right on top of them.

[edit:removed the quote of the post directly above. Seems quite superfluous to quote it here again]

“The significance of the moth is change. Caterpillar into cocoon into beauty… Billy wants to change, too, Clarice.” ― Dr. Hannibal Lector

(from “The Silence of the Lambs”… obviously)

Pointwise, it is not that unbalanced..... Once the Chmmr win by 10 points (-crew cost), once the Shofixti win by 20 points (+crew cost if the last Avatar survived the Divine Wind).
Which, in a series of only 2, averages to a slight cost advantage for the Shofixti.

And apparently, the home team made the win... However weird that is in a game where such things should not have an influence.
Top

krulle wrote:Pointwise, it is not that unbalanced..... Once the Chmmr win by 10 points (-crew cost), once the Shofixti win by 20 points (+crew cost if the last Avatar survived the Divine Wind).
Which, in a series of only 2, averages to a slight cost advantage for the Shofixti.

And apparently, the home team made the win... However weird that is in a game where such things should not have an influence.

I even switches sides when conducting the simulations, replacing the Scouts with Avatars and vice versa, just for consistency’s sake.

(From Re: The Shofixti Scout)

krulle wrote:Maybe I should get into the code, and make it play loop-like, so that one could make a record of statistical averages...... But then, I am even too lazy to do a single run like you do.
So, thank You!

In my Avatar vs. Scout simulations, there were 3 basic scenarios that would play out: 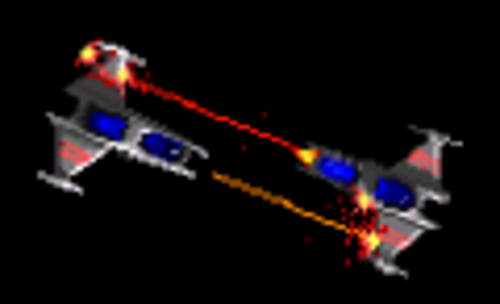 BTW, have you ever tried to find the maximum speed the zapsats can fly?
Using the gravity whip, the Avatar itself can fly faster than its ZapSats.

There's no real tactical use for that, though....
Top
Post Reply
74 posts