One of the most overall takeaways from the Syreen as a created species is how they brazenly represent double meanings of innuendo, many of which are rather risqué, which is then layered with overtones of innocence which try to glaze over some of the more obvious provocative levels of promiscuity.

Mormont wrote:AI is bad even at just using the Chmmr's tractor beam. It'll constantly hold it down even when fuel is empty, when it usually works better in smaller bursts.

Mormont’s observations were very much in play during this match-up: The Chmmr needed to pull the Mycon towards them in with their Tractor Beam, and they kept an electrical arc firmly pressing (or zapping, as the case may be) on the beam’s button, but it had a much more limited effect on the Podship due to its size, as well as it constantly kept thrusting away from the tractor’s pull, and it drained the stubborn Avatar’s battery supply as it drew in closer, but this left them with little power to unleash once it was in range. Still, their super-quick recharge factor is tremendous, so they had no trouble cutting the Podships down to size once they were in range. This technique wasn’t without its downside, however, since the Mycon can still defend themselves, and unleashing 2 Homing Plasmoids in a row usually meant death for at least one ZapSat, which would wear the Avatar’s defenses down, and it soon became vulnerable to follow-up attacks; huge hits started happening with 1 or 2 satellites missing whenever the plasmoids finally made it through the exposed orbital window. The crew regeneration process kept the Mycon in the fight longer for the most part, but it sometimes backfired when they used it whenever the Avatar was closing in, the replenished pod-mates were quickly snuffed away seconds later by the powerful Terawatt laser.
---------------------------------------------------------------------------------------------------------------------
Last edited by The Troglodyte on Thu Jan 18, 2018 5:16 pm, edited 1 time in total.
“He tasks me. He tasks me, and I shall have him! I’ll chase him ’round the moons of Nibia and ’round the Antares maelstrom and ’round Perdition’s flames before I give him up!” ― Khan Noonien Singh
Top

krulle wrote:But Odysseus' Sirens also had no ropes hanging into the water so that crew could pull themselves in.
And the ship jumpers had quite a current to beat, according to the story.

The sirens didn't want the crew alive - they were happy to eat them drowned. The Syreen are pickier.

Also, I don't remember a current - you're not thinking of Charybdis, are you? (that goes with Scylla, not Sirens).
Top

krulle wrote:The Syreen are seriously underpowered this way (IMHO). And their stiletto heel is really week. (At school we loved imagining a line of Syreens standing at the bow and breaking of the heels of their new stilettos and feeding the heels to the gun. Or the reverse: stealing the munition to attach to their navy-issued flat shoes to make stilettos. Who came up with the name for that gun???)

A stiletto also refers to a type of knife, one with a long, thin blade (which is where the heel took its name from). I always assumed the weapon was named more for the knife, with the usual double innuendo that is par for the course with the Syreen.
Top

I fear I really mixed that up with the Scylla/Charybdis element of the story.
Well, most of these small islands have hefty currents, but they are indeed not really mentioned in the Odysse. My bad, thanks for correcting me.


Also forgot about the stiletto (knife). 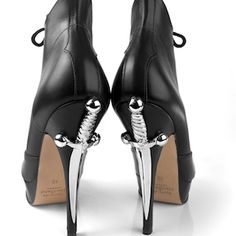 I fear this pinterest image will be accessible for others... 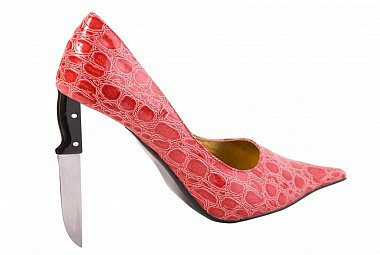 krulle wrote:The Syreen are seriously underpowered this way (IMHO). And their stiletto heel is really week. (At school we loved imagining a line of Syreens standing at the bow and breaking of the heels of their new stilettos and feeding the heels to the gun. Or the reverse: stealing the munition to attach to their navy-issued flat shoes to make stilettos. Who came up with the name for that gun???)

The Stiletto is actually rather useful against some faster vessels. Secondary fire will drain the enemy's health until the low damage isn't an issue. Then, the high rate-of-fire and projectile speed, low energy cost (for infinite firing) and the ship's high turn rate combine to make it a very good fly-swatter. Nevertheless, much like the Glory Device, it was never meant to be the primary armament, and it acts accordingly.
"Sentient life. We are the Ur-Quan. Independence is intolerable. Blah, blah, blah." - the Spathi High Council, Star Control II.
Top

These are some great Syreen observations! But perhaps it’s about time to steer it back to the Avatar, since it is the topic. Besides, I’m hoping in my game I’ll soon unlock access to my own Syreen ships, and, if everything works out, we’ll be delving into a more thorough discussion about them at that time. (or we could split the topic… I mean, I’m not the topic maker master or anything

ANALYSIS: This match-up featured 2 heavy sluggers duking it out, but the power of the Chmmr’s multi-laser attacks, along with the Dreadnoughts’ inability to use their fighters, gave the Avatar fleet a slight edge. However, due to the haphazard nature of the AI’s fighting tendencies, it pretty much looked like 2 amateur heavyweight boxers going at it, each wildly throwing nothing but haymakers, dishing out heavy-hitting blows but offering little in terms of defense.

krulle wrote:And had a chance of actually reaching the Syreen/Sirens if they would use a jetpack to build a bit more speed.
Or a kind of tractor beam for the Syreen to pull in the hapless new crew, without actually having to fly across them.

The Syreen are seriously underpowered this way (IMHO).

Syreen isn't underpowered. A well-crewed Penetrator is scary and at mid-low tier points it should be tricky to get there (the balance mod weakened them a bit in fact).
Top

ANALYSIS: Similar to the skirmish with the Dreadnoughts, this was another one that was evenly matched, although it seemed mostly due to the Avatar’s inability to take the initiative. The Chmmr used their Tractor Beam sparingly, and only when their energy was peaked or when a new Marauder entered the fight far off and away, as opposed to a more ideal situation, like, for example, after the two ship’s noses collided with one another, which would’ve been recommended to pull the Kohr-Ah vessel back into range and finish it off with the Terawatt Laser Cannon.