The Troglodyte wrote:This match-up was reminiscent of a mission in Star Control 1 called… yep, you guessed it… ‘Exterminate!’ You were given the task of taking down a lone Ur-Quan Dreadnought with a small fleet of Shofixti Scouts before it destroys all Alliance colonies in the sector. You have a Starbase, and you can build mines to produce more scouts (the only ships you can buy in this mission) if you like, but that Dreadnought isn’t going to sit around and let you build up your defenses, so the soundest tactic was to combine your forces and hit it with everything you got! If not, even if you damaged it severely, it can retreat back to its only colony and replenish its crew, and then you’re probably toast with a slather of Shofixti jelly, which by the way makes this a fun mission for playing as the bad guys as well! You can take your Dreadnought and target the nearest colony and then… uh, what? Oh yeah, there’s a battle to analyze! Almost forgot!

Out of all of the stock scenarios in SC1, this is the only one I remember, mostly because the setup is both a challenge for which ever side you choose, and because the scenario is so evocative of the Ur-Quan mindset. Definitely a favorite of mine.
Top

Draxas wrote:Definitely a favorite of mine.

As promised, Draxas, I finally remembered to bring it! “Bring what?”, you ask? Well, I knew I still had those old scenarios on my old Star Control disk: (old picture; too lazy to retake) 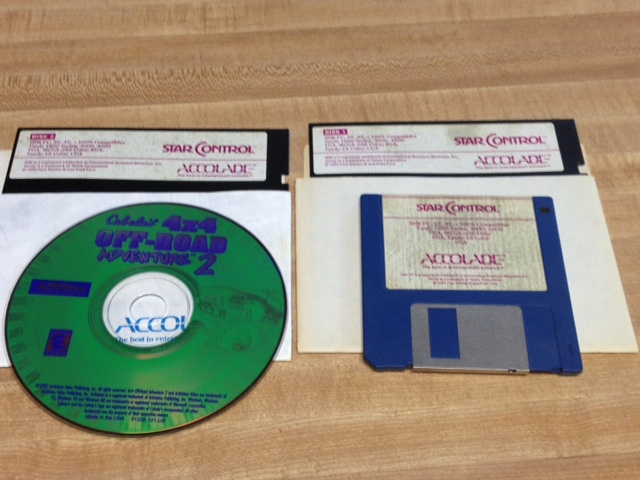 On the old pc version, it had this really cool scenario editor, an ingenious addition which allowed you to create your own customized missions, but since I had wanted to keep the originals, I had copied it on to my hard drive a while back, but I knew I still had the old ones on the original disk, so I popped it in and loaded the scenario editor and copied the ‘Exterminate!’ mission description, just for grins:

Title: Exterminate!
Blurb: The Hierarchy must curb rampant Shofixti breeding!
1st Move: Hierarchy
Random Events: No
Description: Perhaps the bravest species in the Alliance is the marsupial Shofixti. Though young as a sentient species, and near feral in psychology, no other race in the Free Stars is so quick and efficient at exploring and exploiting an uncharted region of space. One such Shofixti-built zone has attracted the attention of the Hierarchy, in the form of an Ur-Quan Dreadnought. Its mission: a seek-and-destroy sortie to eliminate all Alliance colony worlds. The only way the Shofixti can emerge victorious is to destroy the Dreadnought before all their colony worlds are lost.

Hierarchy
StarBase: No
Ur-Quan: Near
To Win: Destroy All Colonies

Alliance
StarBase: Yes
StarBucks: 0
6 Shofixtis: All Near
To Win: None
Available for Purchase: Shofixti

Then, I loaded the disk, looked up the wheel codes on-line for Professor Zorg, and then started the mission. I tried to use PrtScn like I usually would, but it didn’t work… I think it has something to do with it being an old game in a different format or something. Undeterred, I resorted to more drastic measures: 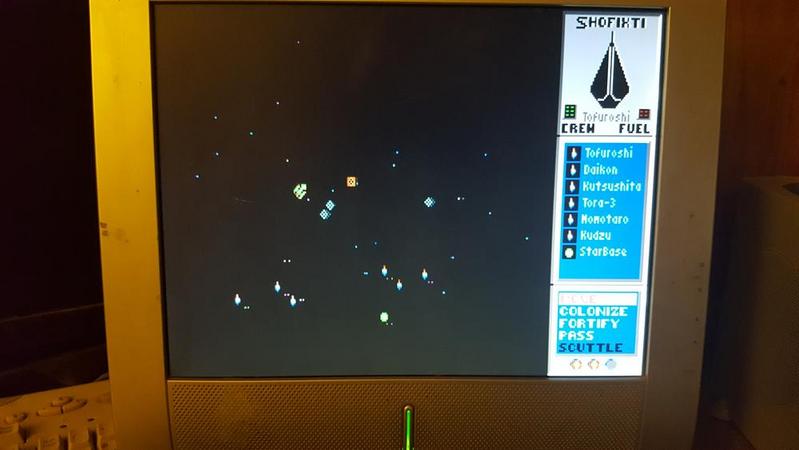 Huh, it’s strange how taking a picture of the screen created a “double dot” effect on some of the lower section stars/planets. Weird.

Ok, so maybe the payoff was a little anticlimactic, but I just wanted to share that.

Man, that takes me back. SC1 was a friend's game, acquired after we had both played through SC2. I mostly liked it for the lore, it filled in a lot of the missing pieces of SC2 backstory that a 30 second blurb by Hayes simply couldn't do justice. My friend was totally into the strategic element, but I was pretty "meh" on that angle (I didn't start to enjoy tactical combat games until I played Ogre Battle for SNES, Final Fantasy Tactics for PS1, and XCom for PC, all years later), so the game kinda failed to resonate with me since I could just fire up SC2's supermelee and have more variety and a more polished experience.

So, as I said, this was the only scenario that was really memorable to me, and primarily because it tied (hard to say if it was retroactively, or if it was planned out all along) so well into the Ur-Quan's character as presented in SC2. The whole scenario still reminds me of the Kohr-Ah siege of the ZFP homeworld, with one warship laying siege to an entire occupied sector alone.

Those floppy disks sure bring back memories too. Somewhere, I still have a couple of shoeboxes filled with 3 1/2" and 5 1/4" disks containing some of my favorite games of yesteryear.
Top

As a total aside, Ogre Battle would have been way better if the enemy started deployed on the map and you didn't get to meet them halfway after taking most of the place over.
Top

While the way it is does lend the game a bit of a feeling of needing to predict where the enemy will approach from (and invariably, sneak around your forces to try to hit your HQ somehow) and racing to grab key cities before the AI does, I can't really argue that some predeployed, static enemy squads would make things quite a bit more challenging. Then again, the real foe is just as often your reputation meter and troop alignments as the actual enemy troops.

While I would love to continue discussing the game, I'd hate to derail this thread any further.
Top

Even worse, against self-replicating foes....

But then, every kill now means that next month there'll be one-hundred probes less, meaning that a lot less Shofixti will have their atoms dispersed by the divine wind then.

Presumably, the probes replicate based on a construction template, irrespective of the actual condition of the probe performing the construction. That said, self-repair doesn't have a priority assigned to it, so presumably it's somewhere in the Melnorme's hard-coded instructions.
Top
Post Reply
45 posts