Before the genetic tempering they were different. All they want is to return to their roots, but passing millennia distorted the knowledge...

It certainly got distorted! Those should be mushrooms, not oranges!

I had briefly considered using the time portal to place us all the way back in the Epsilon Sculptoris and go from there, but that would be 6 days backwards into the past, and from there I’d have to repeat the whole trip again, but since Epsilon Scorpii was only a day away I simply reversed the encounter that took place at Beta Brahe I, putting us back to when we first entered the system, and we turned the nose of the ship around and exited the system. Of course, as usual, my crew was a little disoriented from our quick sighted scan of Beta Brahe, but when I explained that the Mycon surrounding the innerworld would not comply with our request, they immediately understood. 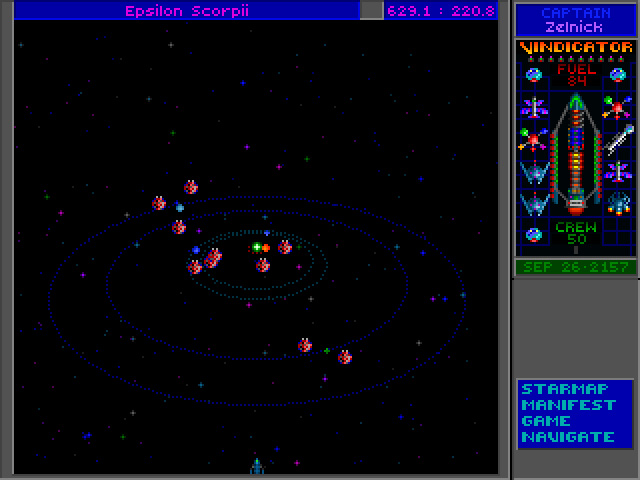 We have just finished penetrating the threshold of the outer system of Epsilon Scorpii and our long-range scanners are showing a great many Mycon Podships flying all around within the system, an estimated 10 Podship squadrons, and with a presumably ghastly amount more of them orbiting the innermost world where they claim is where Juffo-Wup lives, outpours, presides, manifests, exists or whatever the heck else it accomplishes on their world.

If we are unable to convince their “leaders” or whoever they are to listen to our proposal, I have no idea what we’ll do, but we’ll cross that bridge whenever we get to it, but I’m optimistically anticipating that these guys are the true purveyors and supreme agents of the distribution of Juffo-Wup, and will see the benefits of the Organon planet, but they won’t see the drawbacks… drawbacks which will soon be shown to them by our blue lady friends!

I knew right away that it was going to be tough to try and navigate our way through this obstacle course of Mycon ships, but I also had confidence in our Pkunk helmsman Screech, and he was able to effectively time their orbital intervals and how best to approach and slide on past the different sets of ships as they were on their furthest arching route.

Everything worked perfectly, but as soon as we approached close-sensor range of the 1st planet, there were 5 more sets of Podships awaiting! Suddenly, as we slowly approached, waiting for an opening, one of the ships changed course the leave the area and set out presumably to venture out towards another planet, and we fell within its sensors' range. Soon every Mycon in the system was moving in on us as we upgraded our status to Red Alert, and we only had a few moments to respond. Fortunately for us, Podships are still somewhat sluggish, even moreso during interplanetary space travel, so we circled around and coaxed the Mycon vessels to follow, but making sure to keep them at arm’s length: 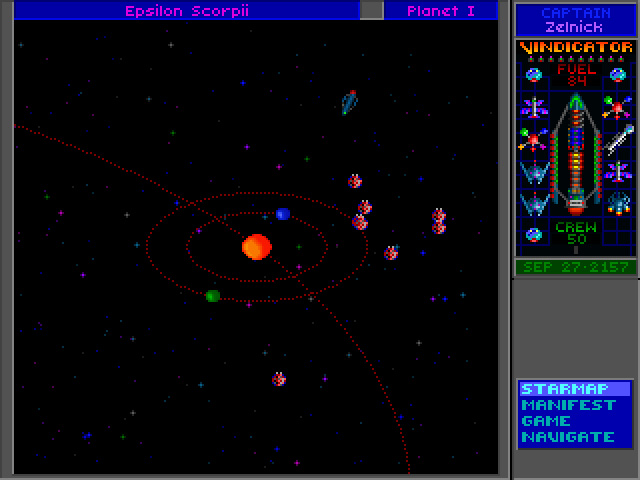 Once there was an opening path to the planet, Screech avoided the encroaching ships and moved us into orbit, where we have been met by the usual massive multitude of Mycon Podships. If this doesn’t work, we’ll be up to our elbows in plasmoids!

Up to your elbows in plasmoids. Yes.
And even worse for them.
They will need to dodge their own plasmoids too.

But the Mycon in the backrows can more effetively quick-thaw more crew members as the front line pdships keep you busy....
Make this work, or you will have to rely on a massive amount of "Hallelujah!"'s from the Pkunk ships.

(Ever tried to gain crew by transferring the Pkunk ship crew aboard your flagship, going into the battle with just the Pkunk captain on board, and returning with a fully crewed Pkunk ship from battle?)
Top

krulle wrote:(Ever tried to gain crew by transferring the Pkunk ship crew aboard your flagship, going into the battle with just the Pkunk captain on board, and returning with a fully crewed Pkunk ship from battle?)

With the way our beloved captain uses his time machine, I am pretty sure he goes in expecting to win more crew than he ever had...
Top

krulle wrote:(Ever tried to gain crew by transferring the Pkunk ship crew aboard your flagship, going into the battle with just the Pkunk captain on board, and returning with a fully crewed Pkunk ship from battle?)

krulle wrote:With the way our beloved captain uses his time machine, I am pretty sure he goes in expecting to win more crew than he ever had...

Interesting… I suppose I never really gave it much consideration. I agree with Death; it’s a bad move, but my opposition is from a different standpoint than a mere RU acquisition. I look at this from the human equation. Therefore, in order for me to accomplish crew replenishment via Pkunk resurrection, I would have to either understaff or allow some of my crew to perish, both of which aren’t particularly appealing to me.

Furthermore, it’s not enough for me simply to replace the little green dots to maintain a total sum, because they’d be replacing the flesh and blood that sacrificed themselves for a good cause by duplications of Pkunk members from the other ship. Perhaps the Pkunk don’t treasure their individuality the same way that we humans do (in fact, they seem rather flippant about their very own existence), but I myself am not willing to attempt to facilitate an advantageous gain by what could be viewed as artificial cloning by self-destruction and coin-flips. Nice suggestion though krulle! Anyway, enough on that…

We established communications with the Mycon orbiting Epsilon Scorpii 1 and they greeted us in their usual, somewhat confusing fashion, but we noticed our dialogue choices included the identical suggestion for the Mycon to check out the world in Organon that should be a perfect place for their Deep Children.

Our communications officer informed me that all of the other possible outcomes for the other choices (such as calling them heinous fungi or asking for them to become our BFFs) have already been explored, and sometimes those choices would lead to more conversation, but will sometimes abruptly end without notice to let the attacking commence, so she suggested that we immediately jump to the pertinent dialogue.

I agreed and told the Mycon of the world inside the Organon system which would be a great planet for them to turn inside out with their Deep Children, and I actually had expected some indication of surprise on the part of the Mycon, but they calmly replied that our suggestion was appropriate, and wished to know more about the world we had prescribed.

We told them about its pure air, the abundance of life occupying the surface (if only for a short time longer) and how it has a sun that warms its surface. Puzzling… Why in the world do the Mycon need to find perfect little M-class worlds that are ideal for most normal carbon-based, air-breathing, water-drinking, sun-bathing creatures and then upend them, turning them into a catastrophic upheaval of geysers of lava and death? Couldn’t they just do the same to some other kind of world instead without having to kill and destroy?

Not only that, but then the Mycon basically gave us a complete rundown of their entire mission, detailing how they would assemble what they call their “Birthing Fleet” and escort it to the planet with a large fleet of their Podships. They even appreciated my suggestion so much that they offered to implant some of their spores into my brain and let them spread throughout my body, that way I could become one with Juffo-Wup. ‘Oh, as tempting as that offer is Mr. Mycon… but, oh my!! -- Would you look at the time?! Gotta run!’


Draxas wrote:Well, with the Spawner, the sector is his oyster now. Follow your favorite lead!

Is this referring to Zelnick or Captain Tanaka?

krulle wrote:I indeed mad a savepoint after the COWABUNGA!, becuas I hoped I could reactivate the conversation, and to restart here if the ambush failed.

If memory serves, I believe there's another Cowabunga opportunity later in the game. (Not a spoiler; just extra incentive to thoroughly explore your options)

Me neither. Clearly, we are not living life to the fullest.