On our way to Procyon II we stopped by the orbital platform, but our stubborn away team reported the exact same thing they had before. Stubborn and lazy!… I went back a 2nd time and the report was repeated again verbatim! I’ve put them all on report. Insubordinate knuckleheads.

Once we entered orbit of the homeworld, I had engineering in conjunction with communications activate the Umgah ’Caster so we could talk to the pre-Chmmr before activating the Sun Device. The only new information they presented us was that our matter-antimatter bomb is suitable to the task of destroying the Ur-Quan’s nearly invincible battle platform, the… wait for it … the Sa-Matra! (they say it so melodramatically!)

We activated the Sun Device and watched as the acceleration of hybridization unfolded before our eyes in only a matter of seconds. The Chmmr immediately asked why we interrupted their process, to which we responded that we wanted to see what they looked like without all that orange junk… and also that we needed their help to defeat the Ur-Quan.

They realized that we’re pretty serious about this whole stopping the Ur-Quan notion, so they’ve agreed to help us anyway they can, even though they have come to the understanding that the only possible way to defeat the Ur-Quan is to destroy their battle platform, the… wait for it… the SA-MATRA! (their newly established species even has more of a flare for the theatrics than ever!).

First, they scanned our logs and databanks to see everything we’ve learned and went down the list of pertinent details, which included knowing that the Sa-Matra is located in the Delta Crateris System, possessing a Dnyarri, which they already knew is dangerous and evil, but they reassured us that the Taalo Device has effectively nullified the creature’s powers. (yeah, unless you bug it too much and wind up talking about daisies and butterflies!)

They also explained that our anti-matter bomb is very powerful, but if we had activated it (because I would never do that!) it would’ve destroyed everything within 500 kilometers. (I guess they forgot they had already told me that moments ago before using the Sun Device!) However, powerful as it may be, they still need to use their crystal technology to reach its true potential for Sa-Matra-destroying power! They then announced that we are now fully prepared for task of doing just that! Awesome!!

They explained that they’re going to fit the Utwig Bomb and their own crystal amplification system into the Vindicator by routing a portion of our vessel’s fusion power through the weapon’s ignition system, thus multiplying its destructive force by a large factor. “Cool,” I thought, “we get to fire some kind of Broodhome crystal bombs at this Sa-Matra, blasting it to smithereens! Right?”

I think I could wrong about that last part, since the Chmmr nonchalantly explained that our vessel will be totally annigi… annihili… Well, you get the picture. Suffice it to say, it would seem that the Vindicator is going to get destroyed in the process. They told us that our flagship will be substantially weakened by their crystal modification technique, so we should probably bring some of their Avatars along to help us get close enough to detonate the weapon and destroy the Sa-Matra. Good idea.

They told us it would take about 2 weeks to complete the modifications, so they placed us in cryogenic chambers to help make the time pass more quickly, and the next thing I knew I was opening my eyes, and as I began coming out of sedation, my mind still foggy from the lapse of consciousness, Commander Hayes is suddenly standing over me, yapping away and telling me mostly everything about what the Chmmr had done to the ship.

Along with their Avatar warships, the Chmmr are also providing us with a ton of minerals and other resources! (Well, not literally a ton, because that actually wouldn’t be very much at all!) Unfortunately, in order to turn my ship essentially into a massive manned torpedo it was necessary to fill 10 of our rear module unit slots with the bomb and crystal stuff, leaving us with only 6, and they also had to remove our emergency warp out and landers as well to add a specialized escape pod unit. 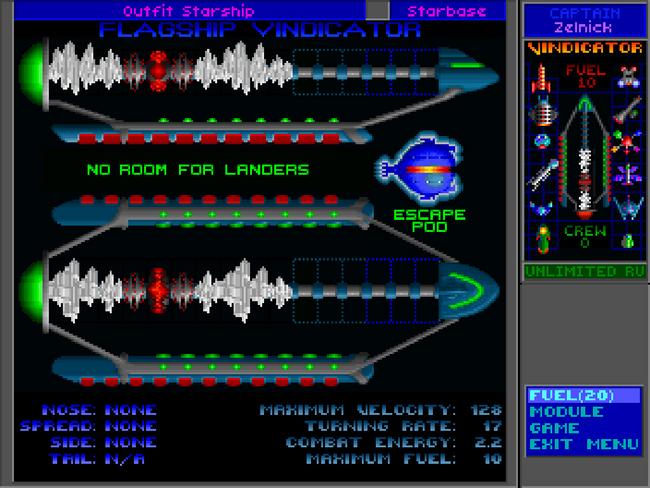 The Troglodyte wrote: ↑Tue Jul 23, 2019 12:59 amHowever, powerful as it may be, they still need to use their crystal technology to reach its true potential for Sa-Matra-destroying power! They then announced that we are now fully prepared for task of doing just that! Awesome!!

This is one of my few points of annoyance with the game. Once you have the pet and the bomb, freeing the Chmmr triggers the endgame, whether you want it to or not. I'd rather it ask before cannibalizing my flagship, thank-you-very-much.
Top

Elestan wrote: ↑Tue Jul 23, 2019 1:19 am This is one of my few points of annoyance with the game. Once you have the pet and the bomb, freeing the Chmmr triggers the endgame, whether you want it to or not. I'd rather it ask before cannibalizing my flagship, thank-you-very-much.

Well, unless you knew exactly what you were doing and/or using mods for that purpose, you would not really have the time to do much of exploring, nor real reason to, so I guess it is somewhat justified. In addition, games of that era really didn't spoil players with choice, typically

That being said, the aforementioned mod could actually include this choice, I think, and only trigger the unlimited RU part of the event, while disabling the modifications till player chooses to.
To be angry is to punish yourself for the errors of others.
Top

Amazing how it always seemed like we'd never get there, but here we are, almost halfway done with the game.

As for those module slots, here's how I usually set up mine:

With those last 10 slots eaten up, there is no way to turn the Vindicator into an effective warship anymore. However, it still behooves you not to leave the ship defenseless; you never know what you might have to face without the aid of your escorts.

(Alternative configuration: I will sometimes replace a crew pod with an auto-targeting module. Makes the Vindicator more effective against standard ships, but I usually don't go that way because of... reasons. Without an escape module, the Vindicator should really only be used in battle when absolutely necessary, anyway.)
Top

Half-way story wise is about right.
A lot will still happen, triggered by previous events.

Still great war machine against both Ur-Quan ship types.
Keep distance, face towards them, fire away.
(why second and not first slot? - you get two shots for the same fuel price -> double damage)

The Precursor working vehicle is inefficient against the Big Trophy anyway, so you need your escorts for that.
Utwig or Chmmr were the ones I used.
Since I did the guards whith my flagship, I only read on the UQM forums that I missed my rewards for the rebellion... Now I leave six slots for the escorts free.
Top

My personal preference would be one Hellbore Cannon, (in the nose) one crew pod, one high-eff fuel system, and three shiva furnaces. (I'd rather have the extra recharging than auto-aiming, but maybe that's just me)
Top

With the unlimited RU the Chmmr provide, my setup only requires some distance (easy to do with all the turning and speed modules), and blast away, The auto-aim makes it hit double, even the defense of the Marauder is down before my batteries are empty, and I can recharge while I wait for the next ship....
Top

Also uhhhh yay im glad i was along for the ride.
We really are taking 3d6 psychic damage from the cringy things we did a few years ago aren't we
Top

Indeed.
I remember I went to visit all races before facing the Ur-Quan combined fleet on my first play.
Just to see if my allies (and possibly others) would join me on this crucial run. I remember my some of my thinking:

Alas, at that time the Dill-Rats, the Thraddash, and the Pkunk did not exist anymore, the Shofixti had no counterpart to talk actively to, and the Arilou previously said they'd not support me with Meat and Bones anymore.
And the Yehat were busy, so no help there either.
The Spathi hid away, also no help.
No Chenjesu, nor Mmrnmhrm.
The Mycon were undecipherable, but I hoped they would see that I am stronger than the Ur-Quan (although the Spathi are right, I am just one ship, and the Ur-Quan are a bunch of fleets), and maybe they would swith their allegiance, to join the Un-Voidable Non (me) to learn from the un-Voidable Non until it can be voided. I hoped I would look strong enough that they were willing to change the Urquan's status from "un-Voidable Non" to "Void the Non".
And the Druuge are likely to hold a grudge against me, because I'll still be unwilling to hand over the bomb they desire so much. But that would've made a minor repayment for what they did to the Burvixese.
The Orz are the Orz, and because I'm a *Happy Camper*, I hoped they would send an attack fleet too, since they like *dancing* in *heavy space*. but then I asked them about the False Men/Androsynth, to pressurize them into supplying an attack force.... Well, that didn't go so well.
The Slylandro possibly reprogrammed their probes and could help me with them. Possibly not.
The Utwig and Supox with their Ultron might be able to see the use of sending their fleets again, or give me fresh insights on how to approach it all.

man, was I dissapointed that all what I did earned me nothing. No Utwig or Supox ships for the final run, nor fleets to distract the Ur-Quans. Nothing from the Yehat besides the standard group of rebel-ships. (I only found out about the revolution reward once UQM was done)
No nothing from anyone. Not even from my hint system (Melnorme), nor extra weapons for my BumpingTool for this last run from the Melnorme.

Only the one-purpose race Chmmr helped me, whose whole purpose was getting stronger to defeat the Ur-Quan and their Big Trophy.

So I reloaded my save-point and just skipped informing the other races/allies of this crucial and final attack.
Top
Post Reply
1542 posts