Heh, he sure is.
*Go, seek dreams in your quarter close to the storage facilities*

And also, as the Melnorme told you (free of charge, even!), visiting the Druuge is no good idea.
Top

That being said, this is excellent evidence for just why they swiftly stopped crewing Penetrators with human crew during the Ur-Quan Slave War. Now, if Talana wasn't a factor, this could pose more of a risk than it currently does.
"Sentient life. We are the Ur-Quan. Independence is intolerable. Blah, blah, blah." - the Spathi High Council, Star Control II.
Top

Trog. Never stop. I love that even if you make no gameplay progress, there's fantastic in-character banter. It's exactly the kind of stuff I wanted from Groombridge Log.
"What's the point in being grown-up if you can't be childish sometimes."
Top

Captain, I might've been playing too much dungeons and errrr [insert fantasy creature other than dragon whose name begins with a D], but It looked like the ultron had a slot or bracket or something that could hold a scrying device, Namely, a CRYSTAL BALL. (I probably missed a meeting)

Zelnick: Kid, I'm busy. We can play games and rescue princesses with magic spells later. We're busy trying to fix an alien artifact of untold power.
Yes, that's all fine and dandy but WHEN GOTP?
Top

palmpet wrote: ↑
Thu Jan 10, 2019 1:44 pm
Trog. Never stop. I love that even if you make no gameplay progress, there's fantastic in-character banter. It's exactly the kind of stuff I wanted from Groombridge Log.

It’s really nice to know as well as encouraging that some folks still stop in to check on my progress! It’s quite refreshing to know that people still care! Thanks!

After our short mission briefing, where it became completely obvious, either by all of the information we’ve gathered or mere process of elimination, it became quickly apparent that our next stop would have to be Zeta Persei, or more specifically… the Druuge.

We’ve known for some time that the Druuge are known for being the wheeler dealers of that section of the galaxy, whereas the Melnorme are content with stationing themselves around gas giants, although I do find it curious how they can show up seemingly out of nowhere at the sound of a HyperWave ‘Caster or intuitively know when somebody’s ship runs out of fuel.

Speaking of the Melnorme, it was they who indicated to us that the Druuge should have the final piece of equipment needed to finally fix the Utwig’s broken Ultron: The Rosy Sphere! However, we must approach the Druuge with caution, not only because we’ve been warned (especially by the Melnorme) that they are not to be trusted… or trifled with but considering that the Druuge are undoubtedly part of the Melnorme’s business competition, it may all just be sly salesmanship.

Still, we’ve seen (by means of our sophisticated Vindicator’s battle simulator system) that the Druuge species themselves appear on their ships dangling from the ceiling in chains, which makes one wonder if this is self-inflicted or is it done to them? Either way it’s pretty appalling. Not to mention the impressive power we’ve seen from their Mauler’s forward cannon, which can blast through a ship with ease and is difficult to evade or repel, whereas even our flagship's point-defense laser system is rendered ineffective by the density of their incredibly fast-moving projectile.

Back to the current situation, after regressing back through time to shortly after obtaining the Ultron from the Supox, we entered QuasiSpace and took the appropriate flux that brought us coincidentally close by to Zeta Persei, a small orange dwarf star with 5 planets, and we have entered that system after a brief journey: 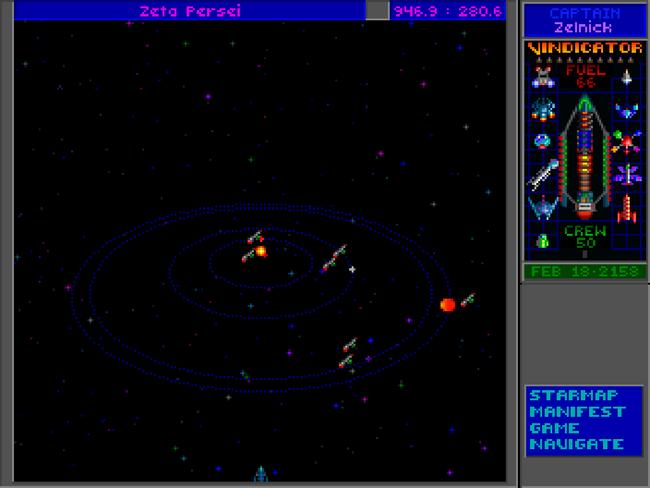 Me: "CAPTAIIIIIIN THE CRYSTAL BALL! I think they have it! (bloody rosy circle sphere)"

Zelnick: "How'd you get onto the bridge? THIS IS FOR ADULTS WITH SECURITY CLEARANCE ONLY GET OUT"

As you see, this is exactly the kind of post im going to make. Good luck trog!
Yes, that's all fine and dandy but WHEN GOTP?
Top

I believe that it is safe to say that we will remain at Yellow alert status for the duration during our visit in Druuge space. These guys are a little rough around the edges and overall creepy to put it lightly. In fact, being around them for any length of time begins sending shivers down my spine.

Yesterday, when we had first entered the Zeta Persei star system, our sensors immediately detected scores of Druuge Mauler patrols around each planet, so after taking the appropriate precautions, we proceeded to the nearest set of Druuge ships to make first contact. We hailed the lead vessel and their presumed captain answered the call, displaying himself front and center on the viewscreen: 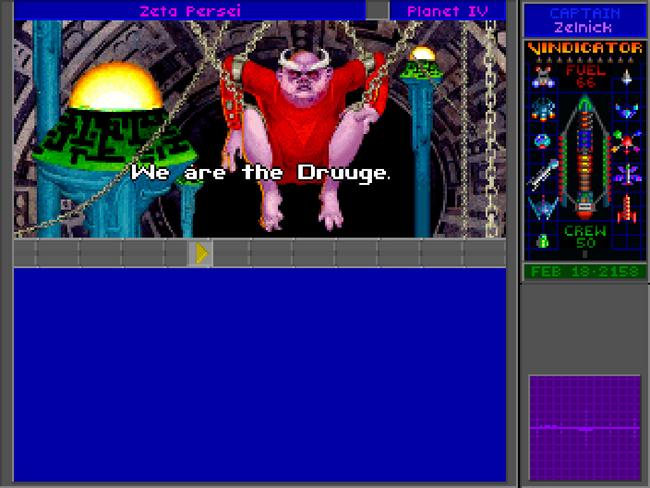 Well, if I’m being totally honest, not exactly front and center, considering to the immediate right-hand side of him was a fairly large object, which appeared to be a red-hot glowing furnace. Hmmm… wonder what that’s used for? Barbecue maybe? I jest, for unfortunately, I have seen via the Precursor-built combat simulator onboard the Vindicator that the Druuge can sacrifice one of their own (or many of their own for that matter) during a skirmish to instantly replenish a portion of their combat battery to keep their fuel-guzzling cannons firing on all cylinders.

As for the Druuge captain, he wore tattered red robes and was hanging from several sets of twisting chains, which shackled him right above the elbow joints and directly under the knees for support, almost as if to be sitting on a swing set -- minus the fun part. Are they the torturers or the tortured? Or perhaps they do a bit of both! I just don’t get it. Also, to complete the devilish look, his glowing eyes followed mine and directly above them, where eyebrows would usually be, there were curved horns in the same pattern as a wildebeest’s horns.

Their choice in music was somewhat disturbing as well, as I noted an eerie dark low horn sound played with the occasional bass tone swell as a steady quiet drumbeat echoed in the background. His arm motioned forward as he spoke, as if some twisted unseen marionette was tugging the strings or rather chains of the pig-nosed Pinocchio, and the occasional drip of snot poured from his nose as he spoke:

He extended a warm greeting and welcomed us to their space, and kindly urged us to proceed to the innermost world if we wished to trade with them, but although his words seemed friendly, his demented voice gave an air of uneasiness in everything he said, almost as if with each sentence came with an unspoken “or we will kill you” along with it.

“We are delighted to make your acquaintance, and hope that we can do business together… or we will kill you.”

Yeah, have you ever had that sneaky suspicion sometimes that somebody just can’t be trusted? Well, that feeling was ever-prevalent during our talks, but I couldn’t help but get drawn in, if nothing other than an insatiable curiosity. We continued towards Zeta Persei 1, and we encountered each of the other Druuge ships within the system along the way. They shared some information about themselves, mostly pertaining to their culture and lifestyle, which seems very business-centric.

They believe in the “dribble-down” system, which is similar to the trickle-down economics approach. (and their noses must also operate under the same system!) It basically means that as long as their economy is booming then the quality of life for all is great. However, when times are tough, well… things get pretty rough on the Druuge homeworld, because then you get laid off, which basically means you quickly receive the status of kindling, since everything on ZP1 has its price, including air and sunlight, and stealing means theft, and theft means furnace time. Ouch.

They also talked about the Melnorme, or actually I should say that they badmouthed the Melnorme, claiming their trading system is spaceway robbery and their fuel rescue system is downright piracy. They even told us that we could benefit greatly from salvaging the resources from the wreckage Melnorme Trader ship. Very creepy. (even creepier than the Melnorme, come to think of it, and that’s saying something!)

I’ve always told myself to try and be tolerant of other cultures and have reminded myself from time to time that different alien species are going to have their own sets of values and perspectives that may differ from our own, and that some species simply look much different than ourselves and we shouldn't be swayed on appearances either, but rather we should always do our best to try to be not only accepting but accommodating, but I’ll admit just the sight of them was making me begin to question that belief system. Diplomacy… Sigh.

Well, at least we passed the first hurdle, Sir.
I'm pretty sure these Druuge would have found a way to send us to their furnaces if we would look like pushovers to them.

I feel much safer in the cabin next to the hellbore cannons right now....
And that the fleet is fully armed, fueled, crewed and ready to fire their weapons as well doesn't hurt much when I see these gigantic flying cannons drifting near us...
Top

Do not worry, captain. It's all just business. Unscrupulous, greedy business, perhaps, but do not take it personally. After all, it's all in the name of profit margins, and as any Druuge worth their salt would tell you, what in life is more important than a good profit margin?

Now, you may not necessarily agree with this yourself, but all cultures have different ideals. You show respect to their culture and... well, you'll just have to hope they do the same.
"Sentient life. We are the Ur-Quan. Independence is intolerable. Blah, blah, blah." - the Spathi High Council, Star Control II.
Top
Post Reply
1541 posts