Ahh, vague omens and mysterious portents. Tangled webs of fate intertwined with the branches of destiny, blown by the capricious winds of happenstance. News, news....uh, actually there is some news!

fluffy_banana wrote:It's rather hard to believe the line that Stardock wasn't either pushing to include elements from the old series or putting some kind of pressure on Paul and Fred, if P&F felt their only recourse was legal action.

They weren't. Stardock's constant position for a long time (like since 2014 at least) has been that they're doing an entirely separate universe and not messing with the SC2 continuity at all, even when people complained that they should be using the Ur-quan and Yehat.

Stardock has been using old series elements in their promotional material, though. 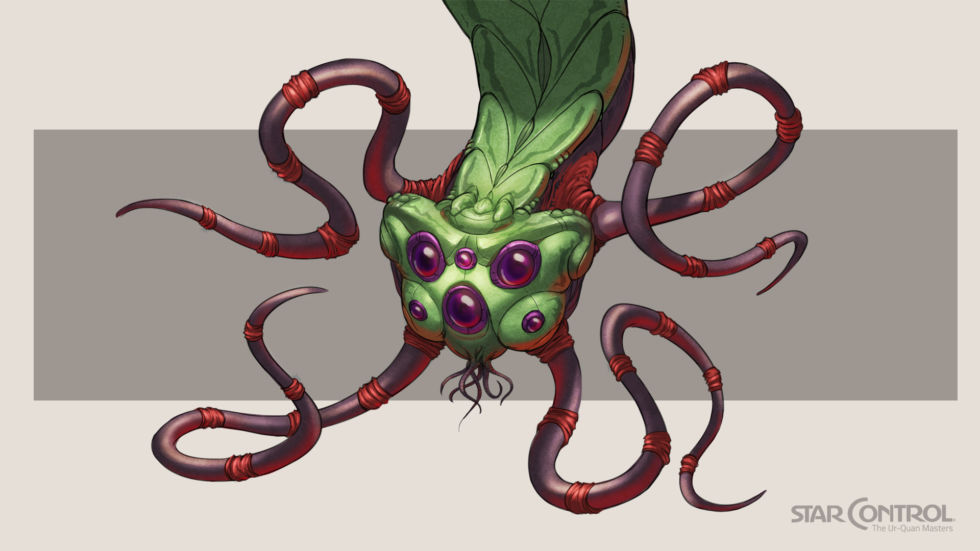 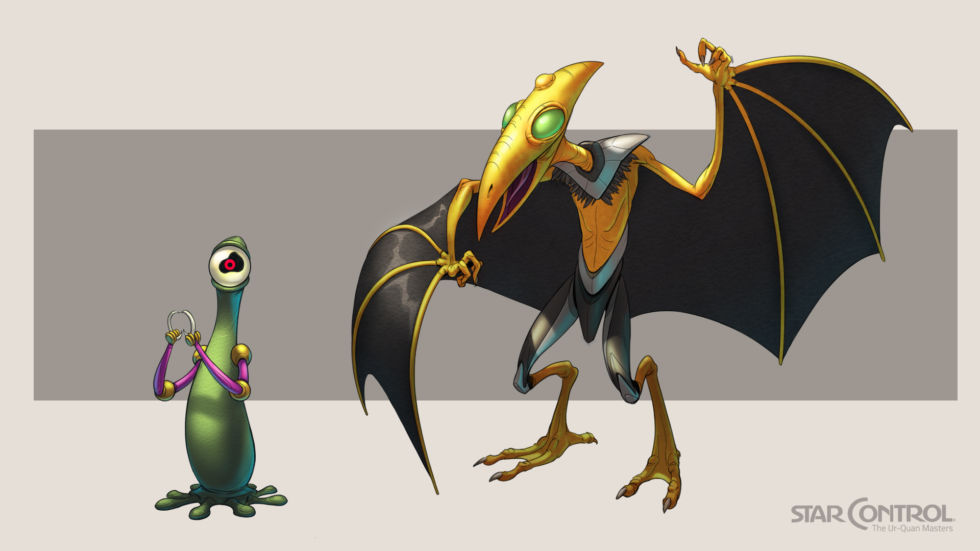 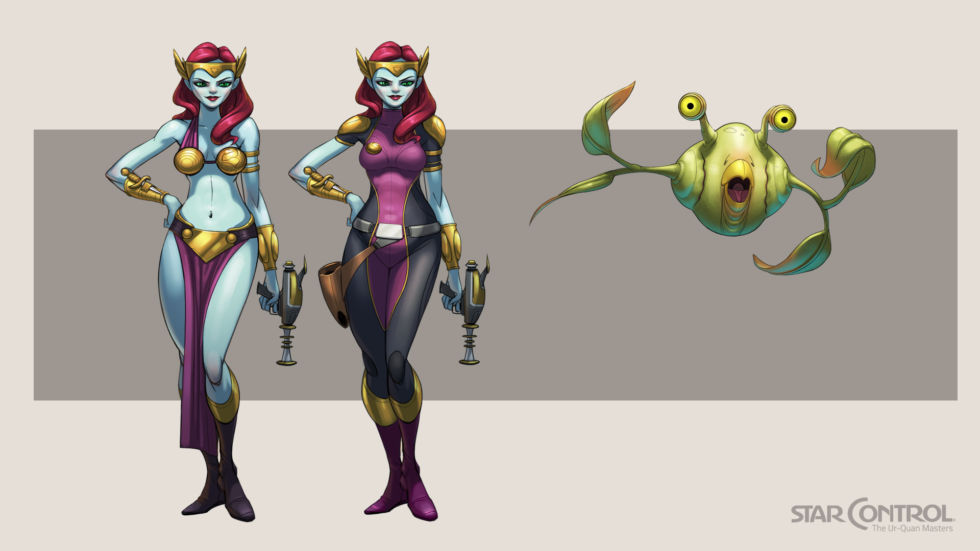 I didn't see anything wrong with these when I first read that article. They're great art, and if I was in Stardock's spot hell yes I would be telling my art department to draw these up too. But PR3 / FF own the IP for these aliens, and if the two groups aren't getting along it looks a little more like Stardock is running roughshod over the original creators.
Top

I honestly just feel like both sides are misunderstanding where the other stands.
"What's the point in being grown-up if you can't be childish sometimes."
Top

Whoa, if Stardock was using those pictures as promo material, I can see why TFB was antsy. That's not their stuff to use.
Top

Death 999 wrote:Whoa, if Stardock was using those pictures as promo material, I can see why TFB was antsy. That's not their stuff to use.

Stardock commisioned that art-work as part of the 25th anniversary celebration of Star Control II. And yes, it has every right to do so.
Top

Commission, perhaps. But use for promoting an "unrelated" product? That's be like me commissioning art of Mario and using him to promote my plumbing service (or perhaps, unrelated but similar feeling 3D platform game). Tell me Nintendo has no legal grounds to stop that.

You do know who Frogboy is, don't you? If anybody is speaking from a position of authority on what the legal documentation says Stardock can and can't do, he does.

I have to admit that I started from a position of being an anti-fan of what Stardock was doing, back when Origins was announced. I always wanted the "real" SC3. SC2 was an awesome story and I want to see what more they have to tell in that vein.

... reading the Ars article that Fred&Paul linked, about Stardock's project, that's EXACTLY what I always wanted to be done in Star Control. Both the game Stardock is making, AND the openness to user-created content. And reading how Brad describes himself, how SC2 affected him - it hits me right here. I know exactly what he's talking about. That's not an evil lawyer talking, that's a superfan of SC2, just like all of us. Anything he does with reference to Fred&Paul's work is pretty clearly done from a position of hero worship. Just like things I did, back in the day.

And then, on the gripping hand, there's how this dispute went public. The one thing that comes to mind when I look at how Fred&Paul announced this is "not ready for prime time". This is not how professionals handle these disputes. This is not how adults handle legal issues. This IS how I, as a dumbass teenager or early-twentysomething, might have thought was a good way to handle it - but now I know better.

You don't start a legal dispute with an unclear broadside to the court of public opinion. You start it with cease & desist letters, making it clear specifically what your objection is and what action you consider necessary to resolve the matter - and BEFORE you do that, you make damn sure you've prepared your ground properly and have a reasonable expectation of prevailing in court.

Yelling in public about being "really, really angry" is not the sort of argument that will get ANYWHERE in a courtroom. This is not what Fred&Paul should have done. They should have gotten their ducks in a row, paid a lawyer, sent the C&D. Only AFTER Stardock failed to do whatever it is Fred&Paul think Stardock should be doing (and it is a major problem that this is not remotely clear to anybody yet) - only THEN do they open up with the public statements - statements that include specific details as to how Stardock is failing to meet its legal requirements.

I'm the biggest Fred&Paul fan there is (yes i am, shaddap, i'll fite u, i'll fite u all). I had a "STRCTRL" license plate for several years. But ... this is absolutely not how they should have handled the issue, and starting just from the manner in which they started this makes me think they haven't thought their position through nearly carefully enough, and maybe are setting themselves up for an entirely unnecessary legal defeat.

I would hate that. I expect everyone would.
Top

Draxas wrote:Commission, perhaps. But use for promoting an "unrelated" product? That's be like me commissioning art of Mario and using him to promote my plumbing service (or perhaps, unrelated but similar feeling 3D platform game). Tell me Nintendo has no legal grounds to stop that.


In that analogy, Stardock would be Nintendo.
Top

Question, then. Paul Reiche and Fred Ford are sitting on the rights to something within the old games. If it's not the original aliens, what is it that they own? Are you saying the contract they signed before now leaves them with rights to nothing at all? I was under the impression that there was some kind of split ownership situation between them and Accolade, and you're now carrying whatever Accolade had.
Top


Why was it okay to sell the games on GoG, but not on Steam or elsewhere?

The simple answer is because we have had our own direct distribution agreement with GOG since 2011 and no agreement with Stardock or Steam or anyone else.

In October of this year, history repeated itself when Stardock began selling our games on Steam and elsewhere (even bundled with theirs), again without getting our permission. This time we couldn't come to an agreement, so we asked that Stardock stop bundling and selling the games. They refused, so we've decided to end our 2011 distribution agreement with GOG as a first step to having the games pulled down.

If this is accurate, then my speculation in my previous post is completely wrong. If Toys For Bob has indeed contacted Stardock and made this request, and been refused, then I don't know why Brad Wardell would be saying "nothing has changed". Unless the request got lost in lower-level channels somehow and he never heard about it.

Anyway, if accurate, it does clarify matters.
Top

Question, then. Paul Reiche and Fred Ford are sitting on the rights to something within the old games. If it's not the original aliens, what is it that they own? Are you saying the contract they signed before now leaves them with rights to nothing at all? I was under the impression that there was some kind of split ownership situation between them and Accolade, and you're now carrying whatever Accolade had.

As far as Stardock knows, they own all the IP they licensed to be part of Accolade's Star Control game. But we don't really know for sure because the game was actually produced by a bunch of people and there is no documentation for who owns what on any of that IP.

So even if Paul and Fred said "Please feel free to use those aliens" we wouldn't because we have no evidence that they have any rights to any of that. That's why we want to be indemnified when they go and do Ghosts of the Precursors. If there's some future dispute over that IP, we don't want to be involved. I am pretty sure it'll be fine but it really isn't asking much for them to do that in exchange for permanently releasing them from all the restrictions that are on that IP.

There is no split ownership regarding Star Control itself. Accolade owned Star Control I, II, and III which later went to Atari which is now to us. If you look on the box, you see that it is Accolade that owns Star Control (I, II, III). Star Control II, of course, was designed by Paul and Fred (and this is acknowledged on the back of the box, you can see it for yourself).

It should be noted that I offered to call them on the phone numerous times to figure out the best way to move forward. They responded with lawyers. They, not us, were the ones who got lawyers involved.

Now, Paul and Fred have made many claims regarding who has what right to sell the DOS games. But so far they have not provided a single document to corroborate their claims.

So on the one hand, we have these signed legal documents and on the other hand, we have, what seems to us, a series of out-of-the-blue demands being made.

Most of you guys know I'm as big of a fanboy of Star Control as it gets. I'm a huge Paul fan from back from the Archon days. As is, I've been instructing the attorneys to show as much restraint and be as gentle as possible about this. But they really need to talk to competent legal counsel instead of making blog posts.
Top
Post Reply
329 posts